Last week a UK tribunal ruled that belief in manmade global warming had the same status as a religious conviction, such as transubstantiation. True believers in the hypothesis will need mountains of faith in the years ahead.

The New Scientist has given weight to the prediction that the planet is in for a cool 20 years - defying the computer models and contemporary climate theory. It’s “bad timing”, admits the magazine’s environmental correspondent, Fred Pearce.

Mojib Latif of the Leibniz Institute of Marine Sciences at Kiel University, quoted by the magazine, attributes much of the recent warming to naturally occurring ocean cycles. Scientific study of the periodic ocean climate variability is in its infancy; for example the PDO or Pacific Decadal Oscillation, was only described in the late 1990s. It’s the Leibniz team which predicted a forthcoming cooling earlier this year - causing a bullying outbreak at the BBC.

“We have to ask the nasty questions ourselves or other people will do it,” Latif told the magazine.
A historical comparison of recent warming contrasts the UN IPCC accounts of Thermageddon - based on climate models - with the post-1800 trend which shows a gradual warming. Little seems out of place in recent times except the predictions, says Dr Syun Akasofu, Founding Director of the International Arctic Research Center of the University of Alaska Fairbanks and former director of the Geophysical Institute.

Aksasofu says multi-decadal oscillations, discovered within the past decade, account for the variability. 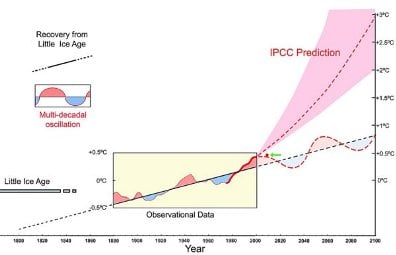 Earlier this summer a mathematical study also predicted cooling, and won an unusual endorsement from the Real Climate website, the blog founded by Al Gore’s PR company and staffed by advocates of the manmade climate change theory.

In a paper entitled Has the climate recently shifted? Professor Kyle Swanson and Anastasios Tsonsis, mathematicians at the University of Wisconsin-Milwaukee, accepted for publication in the journal Geophysical Research Letters, the authors engage with the problem that temperatures have failed to follow the predictions made by computer climate models.

In the paper, Swanson and Tsonis correlated data from the ENSO, the Pacific Decadal Oscillation, the North Atlantic Oscillation, and the North Pacific Index and found that synchronisations occurred four times - in 1910-20; 1938-45; 1956-60; and 1976-1981. After three of these, the climate shifted too. When coupling between the systems was high, climate invariably changed.

The recent cooling, which they suggest started in 2001, is an indicator of a phase shift. (Others point out that discounting the freak El Nino weather event of 1998, which raised temperatures by 0.2C, there has been no statistically significant warming since 1995.)

This cooling, which appears unprecedented over the instrumental period, is “suggestive of an internal shift of climate dynamical processes that as yet remain poorly understood,” they wrote.

“The apparent lack of a proximate cause behind the halt in warming post 2001/02 challenges our understanding of the climate system, specifically the physical reasoning and causal links between longer time-scale modes of internal climate variability and the impact of such modes upon global temperature… the possibility of near constant temperature lasting a decade or more into the future must at least be entertained…

This overshoot is in the process of radiatively dissipating, and the climate will return to its earlier defined, greenhouse gas-forced warming signal. If this hypothesis is correct, the era of consistent record-breaking global mean temperatures will not resume until roughly 2020,” Swanson wrote.

But even the basics are fiercely contested. Does a warmer climate mean more or fewer clouds, and do these trap even more heat, or act as a sunshade, cooling it back down again? Clouds are so poorly understood, you can take your pick. So if the climate isn’t getting warmer, the theory requires the view that the energy must be “hiding” somewhere, mostly likely in oceanic heat sinks.

But neither the feedbacks, nor the oceans, are currently being kind to contemporary climate theory.
Source Link: theregister.co.uk