RON HOUSE
How to see for yourself the 'Global Warming' climate models are false by Ron House
Friday, July 31st 2009, 4:01 AM EDT
Co2sceptic (Site Admin)
When I started looking into the claims of dangerous warming due to carbon dioxide, I was completely baffled, buried in details of climate models, puzzled by energy balance diagrams, and so forth. Was there a "greenhouse" blanketing the Earth, slowly frazzling us to death? The truth could have been anything. If you've followed this path too, you'll know what I mean. But one thing, one single piece of the jigsaw, cut through all the fog and answered the question. I want to show you the thing that absolutely clinched the global warming question for me. I have postgraduate training in physics, which helped, but the basic point is understandable by anyone, and in this article I want to explain what seems to me the key, conclusive fact in everyday terms.

Let's say it's a cold night and Fred climbs into bed: 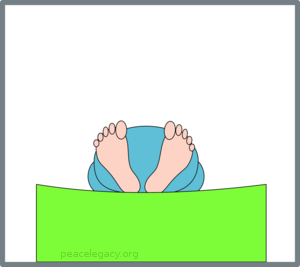 Will Fred use a blanket to keep warm? If so, the air will heat up close to Fred because his body warms the air and the blanket prevents it from moving away. On the other hand, as the night progresses, the air beyond the blanket will cool: 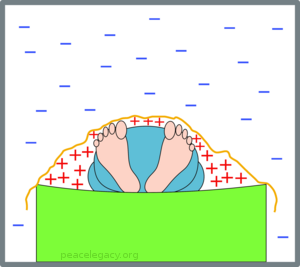 (B) With a blanket, the warm air collecting around Fred warms him up.

Now what if Fred (forgetful Fred) didn't use a blanket? The warm air escapes and tends to rise (warm air being less dense than cold air): 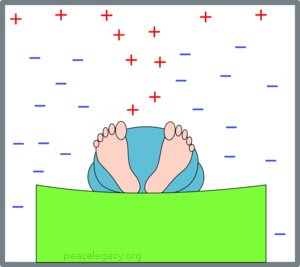 (C) With no blanket, warm air escapes and Fred shivers.

Poor Fred gets colder as the night wears on. But now we come to the point of the exercise: How do we know whether Fred used, or did not use, a blanket?

"Easy," you say: "Take a look!" But let's suppose that Fred is a very light sleeper, we dare not put on the light, so there's no way we can see if there's a blanket. But—surprise!—we just happen to have an infra-red scanner that can tell us the temperature of the air at various spots throughout the room. Depending on whether Fred uses a blanket, the temperature change in the room follows one of the two characteristic patterns we saw above; so if we check where the air gets colder and where it gets warmer as the night wears on, we know, for a fact, whether or not Fred used a blanket, even without being able to see it. If Fred did use a blanket, our scanner should show results like this (note how we can't see the blanket, but we can be sure that it is there): 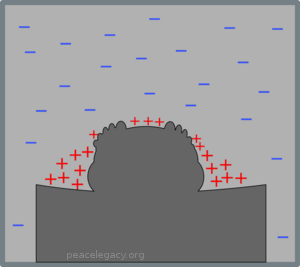 (D) Warm air collects in a contained region, so there must be a blanket.

On the other hand, if he does not use a blanket, we will see the temperature change in a pattern something like this: 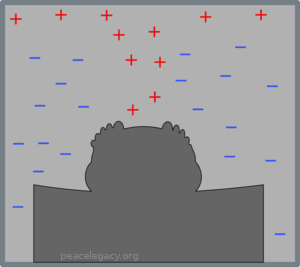 (E) Warm air escapes upwards, so we are sure there is no blanket.

Once again, there is no doubt at all what is going on. In science, nothing is absolutely certain, but depending on which temperature pattern develops, we can be very, very sure indeed of the answer to the question: Did Fred use a blanket?

Now we can turn to the global warming question, whether the Earth is surrounded by a 'blanket' of anthropogenic (human-generated) greenhouse gas stoking up the temperature of the planet. The physics of a real blanket (as with Fred in the fable above) and a gaseous 'blanket' around the Earth differ, but just the same, different heat dissipation (or retention) processes will result in different characteristic patterns of temperature change. Just as Fred will be surrounded by something roughly resembing one of two quite different patterns of air temperatures, so likewise will temperature changes around the Earth have a quite definite pattern, depending on which climate theory is right. Scientists whose paycheck does not depend on agreeing with global warming alarmism will all agree with this simple statement. It's part of the basic skill of having a 'nose' for physics.

What, then, are our main competing climate theories? The IPCC's reports are based on results from a collection of climate computer models; they have nothing else. These are simply computer programs that, in essence, contain a computerised version of the assumptions and beliefs of the climate modeller as to how the climate of the planet works. Whether these assumptions are well-founded is another question, but the key point is that whatever these assumptions may be, when the climate model is run, it generates its 'predictions' by calculation of hypothetical futures for the behaviour of the atmosphere. These 'futures' contain, as an essential element, predictions of the changes of atmospheric temperatures at various heights above the planet and the various latitudes all the way from south pole to north pole.

So now we come to the graphs that clinch the matter. All global warming models predict some sort of developing 'hotspot' in the atmosphere above the tropics. Here is the graph for one of the models, but they all look roughly similar: 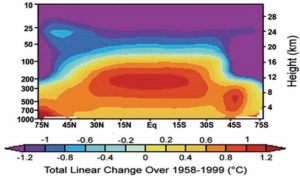 (F) Model predicts air above the tropics heats up.

This picture shows the air from 75 degrees north to 75 degrees south (the equator in the middle) and up to 30 km above the Earth. We can think of this air pattern as corresponding to the pattern in Fred's bedroom when Fred used a blanket: although the actual mechanism is different, something is 'keeping the heat in', so to speak. Just as we did with Fred in bed, we can compare reality with this picture. Is the heat in the real atmosphere doing what the model predicts? Here is the temperature trend in the real world: 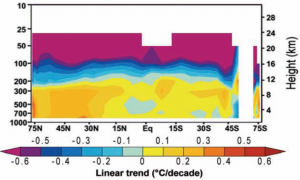 What have we actually proved here? Well, proved, without possibility of error, nothing, of course: no question at all about the real world ever has a complete perfect proof as an answer, so don't be misled if someone says the world still might be heating due to CO2 despite the absence of the warm spot that is supposed to do the warming. Of course anything might be happening; but how likely is it? Well how likely is it that Fred has a blanket, but the air around him is getting colder just as if he had no blanket, and yet Fred is warming up despite that? The two questions have the same answer: not very.

Yet surprisingly, some proponents of global warming alarmism actually resort to this very strategy. "True," they say, "the hot spot isn't developing. But that is because the heat is being stored up elsewhere—it's "in the pipeline"—and one day it will burst forth with even greater severity and vengeance."

What can we make of that claim? Well, thinking back to Fred again, it amounts to this: We use our temperature probe in Fred's darkened bedroom and we see a pattern like that in (E) above, corresponding to no blanket: Fred should be freezing! But actually, the heat has all gone into Fred's body, despite the complete absence of the hot air which is the mechanism for making it do so. In other words, Fred got warmer by disobeying the second law of thermodynamics—in other words, by magic. Likewise, if someone says heat is being secretly stored somewhere by global warming, despite the absence of the very mechanism that does the warming, they are saying global warming is happening by magic. That is the harsh truth of the matter.

One thing I have learned whilst studying the global warming question is that, like many other physical systems, the climate is constrained by limits that can be understood by any intelligent person willing to learn some simple physics. The 'hotspot' is one of them. Anyone talking down to you and telling you you have to take the word of some mythical 'consensus' of 'experts' is trying to hoodwink you.
Source Link: peacelegacy.org