I occasionally hear the complaint that some of what I write is too technical to understand, which I’m sure is true. The climate system is complex, and discussing the scientific issues associated with global warming (aka “climate change”) can get pretty technical pretty fast.

Fortunately, the most serious problem the climate models have (in my view) is one which is easily understood by the public. So, I’m going to make yet another attempt at explaining why the computerized climate models tracked by the U.N.’s Intergovernmental Panel on Climate Change (IPCC) – all 23 of them – predict too much warming for our future. The basic problem I am talking about has been peer reviewed and published by us, and so cannot be dismissed lightly.

But this time I will use no graphs (!), and I will use only a single number (!!) which I promise will be a small one.
Source Link: drroyspencer.com
THIS ARTICLE CONTINUES

Reducing your carbon footprint in the wake of Al Gore’s “An Inconvenient Truth” was the hottest thing for liberal elites and celebrities alike, but their sell to the American people seems to have gotten stale.

It appears that politicians haven’t lost interest, though. Even though global temperatures stopped rising in 2001 and despite the almost total failure of the Kyoto Protocol to reduce carbon dioxide (CO2) emissions in the European Union, President-elect Obama continues to make green energy and a new green economy one of his top agenda items. The Supreme Court’s 2008 decision that carbon dioxide is indeed a “pollutant”— and its instruction to the EPA that it must decide whether to regulate CO2 under the Clean Air Act—offers Obama the opportunity to force new and costly carbon emissions regulations on businesses large and small.
Source Link: townhall.com
THIS ARTICLE CONTINUES

Print Article
views 1,145
ROY SPENCER
The 800 Pound Gorilla in the Climate System
Wednesday, April 8th 2009, 12:46 PM EDT
Co2sceptic (Site Admin)
The issue of global warming has so many facets that it has always been difficult to concisely state the objections we skeptics have to the theory (yes, ‘theory’) that our present warmth is caused by all of you consumers out there driving your SUVs and eating Big Macs. What follows is a demonstration of my main objection.

But how often in science is it decided that the first hypothesis to come along will forever be the only one allowed? That is effectively what the United Nations Intergovernmental Panel on Climate Change (IPCC) has done.
Source Link: drroyspencer.com
THIS ARTICLE CONTINUES

Print Article
views 1,236
ROY SPENCER
Set Phasers on Stun - Roy Spencer
Sunday, March 29th 2009, 3:33 PM EDT
Co2sceptic (Site Admin)
Excerpt: As those who have been following our work already know, our main conclusion is that climate sensitivity has been grossly overestimated due to a mix up between cause and effect when researchers have observed how global cloud cover varies with temperature. To use my favorite example, when researchers have observed that global cloud cover decreases with warming, they have assumed that the warming caused the cloud cover to dissipate.

This would be a positive feedback since such a response by clouds would let more sunlight in and enhance the warming. […] All 20 of the IPCC climate models now have positive cloud feedbacks, which amplify the small about of warming from extra carbon dioxide in the atmosphere. But if cloud feedbacks in the climate system are negative, then the climate system does not particularly care how much you drive your SUV. This is an issue of obvious importance to global warming research. Even the IPCC has admitted that cloud feedbacks remain the largest source of uncertainty in predicting global warming.
Source Link: drroyspencer.com
THIS ARTICLE CONTINUES 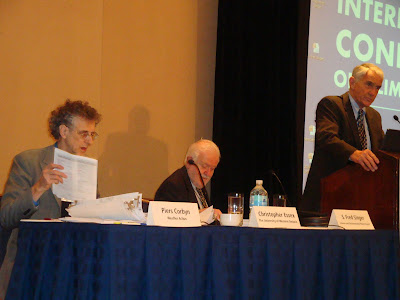 Many thanks the Roy Spencers Blog for photo
Source Link: torydrroy.blogspot.com

Print Article
views 3,260
ROY SPENCER
Increasing Atmospheric CO2: Manmade…or Natural?
Thursday, January 22nd 2009, 3:25 AM EST
Co2sceptic (Site Admin)
I’ve usually accepted the premise that increasing atmospheric carbon dioxide concentrations are due to the burning of fossil fuels by humans. After all, human emissions average around twice that which is needed to explain the observed rate of increase in the atmosphere. In other words, mankind emits more than enough CO2 to explain the observed increase in the atmosphere.

Furthermore, the ratio of the C13 isotope of carbon to the normal C12 form in atmospheric CO2 has been observed to be decreasing at the same time CO2 has been increasing. Since CO2 produced by fossil fuel burning is depleted in C13 (so the argument goes) this also suggests a manmade source.
Source Link: drroyspencer.com (Dr Roy Spencer)

Print Article
views 1,230
ROY SPENCER WEB ARTICLE
New Study Doesn’t Support Climate Models (But You’ll Never Hear About It)
Wednesday, January 14th 2009, 4:00 AM EST
Co2sceptic (Site Admin)
A new study just published in the January 2009 issue of Journal of Climate uses a model to study the effect of warming oceans on the extensive low-level stratocumulus cloud layers that cover substantial parts of the global oceans. This study, entitled “Response of a Subtropical Stratocumulus-Capped Mixed Layer to Climate and Aerosol Changes”, by Peter Caldwell and Christopher Bretherton, is important because it represents a test of climate models, all of which now cause low level clouds to decrease with warming..
Source Link: drroyspencer.com

Now that there have been 50 full years of atmospheric carbon dioxide concentration monitoring at Mauna Loa, Hawaii, I thought January1, 2009 would be an appropriate time to take a nostalgic look back.

As you well know from Al Gore’s movie (remember? It’s the one you were required to come to English class and watch or the teacher would fail your kid), we are now pumping 70 million tons of carbon dioxide into the atmosphere every day as if it’s an “open sewer”. Well, 50 years of that kind of pollution is really taking its toll. So, without further ado, here’s what 50 years of increasing levels of CO2 looks like on the Big Island:

I now have a dedicated website for my global warming articles & blog:

which is more professional looking that what I've had before.

If you have previously linked to my pages at WeatherQuestions.com (most likely you've linked to "Global Warming and Nature's Thermostat"), please change it to something like "Roy Spencer on Global Warming" or whatever suits your tastes, and use the new address.