April 14, 2011: If you've ever stood in front of a hot stove, watching a pot of water and waiting impatiently for it to boil, you know what it feels like to be a solar physicist

Back in 2008, the solar cycle plunged into the deepest minimum in nearly a century. Sunspots all but vanished, solar flares subsided, and the sun was eerily quiet.

"Ever since, we've been waiting for solar activity to pick up," says Richard Fisher, head of the Heliophysics Division at NASA Headquarters in Washington DC. "It's been three long years."
Source Link: science.nasa.gov
THIS ARTICLE CONTINUES

The predicted size would make this the smallest sunspot cycle in nearly 200 years.

Updated below with comments by Piers Corbyn
Source Link: solarscience.msfc.nasa.gov
THIS ARTICLE CONTINUES

The teleconference panelists are:

Supporting information for the briefing will be posted at: www.nasa.gov/sunearth

Audio of the teleconference will be streamed live on the Web at: www.nasa.gov/newsaudio
Source Link: newsystocks.com

Print Article
views 1,527
SOLAR CYCLE 24 SOLAR CYCLE 25 HEADLINE STORY UPDATED DAVID HATHAWAY
David Hathaway Solar Cycle 24 Sunspot Forecast IS Making Solar Cycle 25 Even Worse!
Wednesday, October 6th 2010, 6:18 PM EDT
Co2sceptic (Site Admin)
For those of you who follow David Hathaway's Solar Cycle forecasts, it is not looking good for Solar Cycle 25. Solar Cycle 25 is due to start about the end of 2020, nothing dramatic about that, apart from it WILL be lower in its Sunspot count then Solar Cycle 24, and boy oh boy how the numbers are starting to fall!

I have kept track of the Solar Cycle 24 forecasts from David Hathaway, and the latest prediction compared from a year or so ago takes a dramatic fall, no need for me to say any more just take a look......

This is the forecast of Solar Cycle 24 from early 2009

SUN GAZING These photos show sunspots near solar maximum on July 19, 2000, and near solar minimum on March 18, 2009. Some global warming skeptics speculate that the Sun may be on the verge of an extended slumber.
Source Link: nytimes.com
THIS ARTICLE CONTINUES

Print Article
views 2,167
SOLAR NEWS SOLAR CYCLE 24 KIRTLAND GRIFFIN
Solar Physicist Predicts Ice Age. What happened to global warming?
Tuesday, July 7th 2009, 4:45 AM EDT
Co2sceptic (Site Admin)
Timo Niroma, a physicist from Finland, publishes a Solar Report each month. He has given his permission to use it and distribute it to all so here it is. It will be a regular feature here and I hope you look forward to it as much as I do. The report is not written in the usual user-friendly way, but is rather intended for scientists that are familiar with the information contained in it. I will attempt to simplify and explain the details of the report and how it could impact you and, of course, Al Gore and company. As the predictions come true, as I assume they will, the green lobby will go on unemployment compensation. Let's start at the beginning and take it piece by piece.

"JUNE BREAKING NEWS: THE CYCLE GOES AT THE MOMENT BELOW DALTON LEVEL" gives away the punch line but let's see how he gets there.

In the following Timo discusses the sunspot activity of the new, as yet not begun, cycle #24:
Source Link: examiner.com
THIS ARTICLE CONTINUES 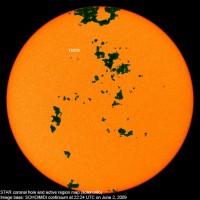